About that J. Krishnamurti meme going around... 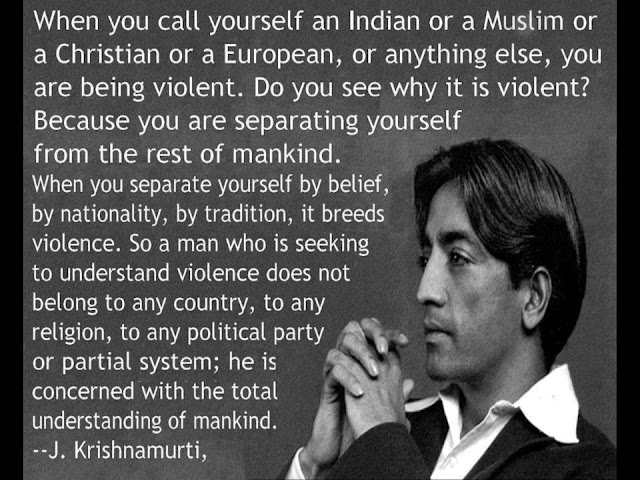 “When you call yourself an Indian or a Muslim or a Christian or a European, or anything else, you are being violent. Do you see why it is violent? Because you are separating yourself from the rest of mankind. When you separate yourself by belief, by nationality, by tradition, it breeds violence. So a man who is seeking to understand violence does not belong to any country, to any religion, to any political party or partial system; he is concerned with the total understanding of mankind.”

The above quote came across my Facebook feed recently.  At first glance it looks like wise words, Krishnamurti's sentiment is very humanistic, and what he's trying to say is worth listening to. However, if you spend more than a second thinking about it, the woo-woo slaps you in the face. Where Krishnamurti fails in reason is that he is redefining the word violence outside any intelligible meaning.  By saying that violence is when you separate yourself from the rest of humanity.

The quote above begins with Krishnamurti giving a definition of tribalism, but the tail end of the quote implies that any separation is his version of violence.  Let's be clear on what violence is. Violence is doing tangible, physical harm to others. It is not calling some one a name, and it is definitely not joining or identifying with a group.

To reiterate, This is violence:
And this is NOT violence:

According to Krishnamurti, the black people in the "Not violence" photo above are being violent because they are identifying themselves as black, and thus not white like the police officer in the photo.  That same police officer is being violent by identifying himself as a cop, and thus not a civilian.  Ironically, that last photo not only exposes the absurdity of Krishnamurti's definition of violence, but refutes the very thing he was trying to say while simultaneously reiterating his sentiment.

How the photo refutes Krishnamurti is that the Black Lives Matter movement is in response to rampant and inexcusable police violence and institutionalized racism in many police departments in America and yet there is a white police officer holding up a #BlackLivesMatter protest sign.  Human identity is a necessary component of our psyche.  To end violence is not to get rid of our differences, but to embrace them when we can, dissect them and change when they cannot.  right now, American police departments are being dissected, we as a people cannot accept their treatment of certain members of our society.  Eventually, we will change the outlook of police officers towards black citizens.

Separating oneself from others does not necessarily breed violence. It can also breed corroboration and cooperation; in fact humanity is at its best when doing so.  But if we all have the same beliefs, the same ideas, belong to the same groups, then what is best in humanity dissipates.  It is not the act of differentiating oneself by idea or nation that breeds violence, the desire for violence is in some ideas themselves. Does your religion allow you to lie or harm non-followers?  Does your group necessitate hostility to other groups (like the KKK or NFL teams)? Then THAT is the cause of violence through groups: the design and desire within the group itself.  Often the purpose of the violence is more power for the group, or at least for the leaders of the group.  Until notions of personal power are eradicated from the human psyche, there will be violence.  Until then, redefining a component of identity as violence only asks the wrong questions, thus seeks the wrong answers.
Posted by Show-Me Skeptic at Thursday, August 06, 2015

Show-Me Skeptic
I'm an an educator from Missouri trying to better the world through teaching critical thinking.